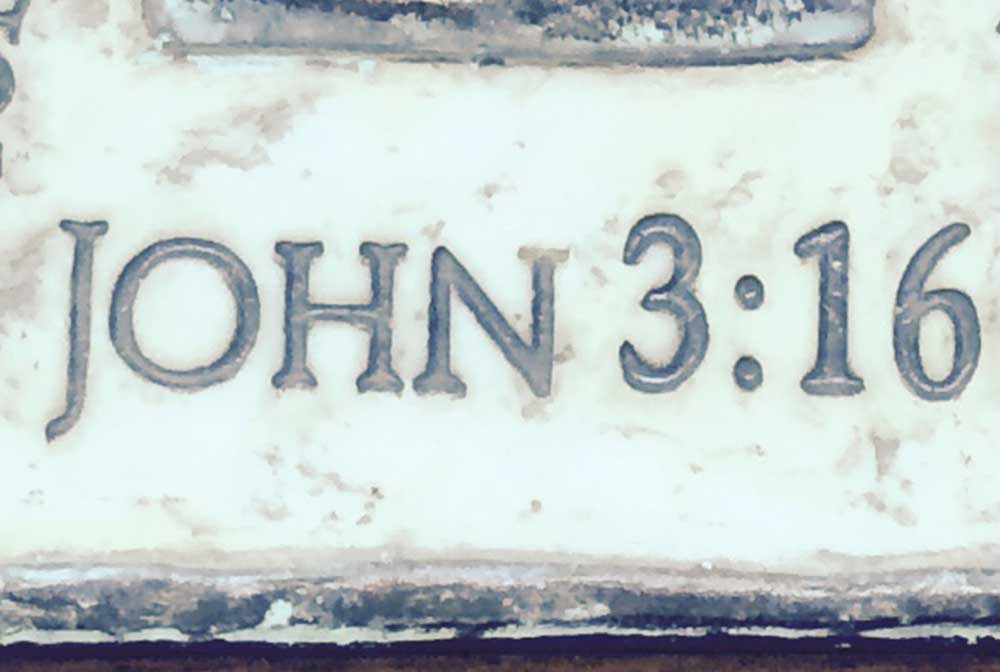 The most famous verse in the Bible, at least among Christians, is John 3:16. But do we really understand what it means? Here are ten things to keep in mind as you reflect on it.

(2) What is the focus of the word translated “so”? Is John here merely describing the manner in which God loved the world? Is he telling us that it was in this particular way that God’s love was made manifest? Or could he also be emphasizing the intensity of the divine love, as if to say, God loved the world “this much”? The answer is probably a bit of both. God’s love was so great and so magnanimous that it expressed itself in the most stunning and breathtaking gift imaginable: that of his own Son.

(3) Often the interpretation of John 3:16 begins with the term “world”, for it is believed that here lies the key to a proper appreciation of the dimensions of divine love. “Just think,” we are told, “of the multitudes of men and women who have, do now, and yet shall swarm across the face of the earth. God loves them all, each and every one. Indeed, God so loves them that he gave his only begotten Son to die for each and every one of them. Oh, how great the love of God must be to embrace within its arms these uncounted multitudes of people.”

Is this what John had in mind? It is undeniably his purpose to set before us the immeasurable love of God. But are we able to perceive how immeasurable God's love is by measuring how big the world is? I don’t think so.

What is the finite sum of mankind when set opposite the infinitude of God? As B. B. Warfield once said, we could as well measure the strength of the blacksmith by declaring him capable of supporting a feather on an outstretched palm! The primary force of this text is certainly to magnify the infinite quality and majesty of God's love. But such an end can never be reached by computing the extent or number of its objects. Do we to any degree heighten the value of Christ's death by ascertaining the quantity of those for whom he died? Of course not! Had he but died for one sinner, the value of his sacrifice would be no less glorious than had he suffered for tens of millions of worlds!

John wants us to reflect in our hearts upon the immeasurable character of so great a love, and that we do so by placing in contrast, one over against the other — God and the world. What does this reveal? Of what do we think concerning God when he is seen loving the world? And of what do we think concerning the world when it is seen as the object of God's love? Is the contrast this: that God is one and the world many? Is it that his love is magnified because he, as one, has loved the world, comprised of many? Again, certainly not.

This love is infinitely majestic because God, as holy, has loved the world, as sinful! What strikes us is that God who is righteous loves the world which is unrighteous. This text takes root in our hearts because it declares that he who dwells in unapproachable light has deigned to enter the realm of darkness; that he who is just has given himself for the unjust (1 Peter 3:18); that he who is altogether glorious and desirable has suffered endless shame for detestable and repugnant creatures, who apart from his grace respond only with hell-deserving hostility! Thus, as John Murray has said,

“it is what God loved in respect of its character that throws into relief the incomparable and incomprehensible love of God. To find anything else as the governing thought would detract from the emphasis. God loved what is the antithesis of himself; this is its marvel and greatness” (“The Atonement and the Free Offer of the Gospel,” in Collected Writings of John Murray [Edinburgh: The Banner of Truth Trust, 1976], I:79).

(4) When we read John's Gospel (and Epistles), we discover that the “world” is viewed fundamentally neither as the elect nor non-elect but as a collective organism: sinful, estranged, alienated from God, abiding under his wrath and curse. The world is detestable because it is the contradiction of all that is holy, good, righteous, and true. The world, then, is the contradiction of God. It is synonymous with all that is evil and noisome. It is that system of fallen humanity viewed not in terms of its size but as a satanically controlled kingdom hostile to the kingdom of Christ. It is what God loved in respect of its quality therefore, not quantity that sheds such glorious light on this divine attribute.

(5) B. B. Warfield is extremely helpful in making sense of the word “world” in this text.

“The marvel . . . which the text brings before us is just that marvel above all other marvels in this marvelous world of ours – the marvel of God's love for sinners. And this is the measure by which we are invited to measure the greatness of the love of God. It is not that it is so great that it is able to extend over the whole of a big world: it is so great that it is able to prevail over the Holy God's hatred and abhorrence of sin. For herein is love, that God could love the world – the world that lies in the evil one: that God who is all-holy and just and good, could so love this world that He gave His only begotten Son for it, -- that He might not judge it, but that it might be saved” (“God’s Immeasurable Love,” in Biblical and Theological Studies, edited by Samuel G. Craig [Philadelphia: Presbyterian and Reformed Publishing, 1952], pp. 515-16 [emphasis mine]).

“It is not here a term of extension so much as a term of intensity. Its primary connotation is ethical, and the point of its employment is not to suggest that the world is so big that it takes a great deal of love to embrace it all, but that the world is so bad that it takes a great kind of love to love it at all, and much more to love it as God has loved it when He gave His son for it. The whole debate as to whether the love here celebrated distributes itself to each and every man that enters into the composition of the world, or terminates on the elect alone chosen out of the world, lies thus outside the immediate scope of the passage and does not supply any key to its interpretation. The passage was not intended to teach, and certainly does not teach, that God loves all men alike and visits each and every one alike with the same manifestations of His love: and as little was it intended to teach or does it teach that His love is confined to a few especially chosen individuals selected out of the world. What it is intended to do is to arouse in our hearts a wondering sense of the marvel and the mystery of the love of God for the sinful world — conceived, here, not quantitatively but qualitatively as, in its very distinguishing characteristic, sinful” (ibid., 516).

The contrast, then, is not mathematical, but moral. This declaration is breath-taking not because we see in it a contrast between the one God and the numerical composition of those who are its objects. We are shocked and overwhelmed, instead, because the immeasurably holy and righteous One could find it within himself to love a world that is at enmity with him who created it.

(6) We must give full weight to the significance of God “giving” the Son to this fallen and corrupt “world”. We must not overlook the emphasis on the element of sacrifice. God’s sending of his Son was not undertaken with indifference. It was the most amazing and breathtaking act of sacrificial love ever known. As Paul said in Romans 8:32, “he who did not spare his own Son but gave him up for us all, how will he not also with him graciously give us all things?”

(7) We must never think that in “giving” the Son the Father coerced him. The Lord Jesus Christ was not compelled but lovingly and willingly and altogether voluntarily chose to be sent. Just as often as we read of the Father sending or giving the Son we read of the Son coming. “I came that they may have life and have it abundantly” (John 10:10). Jesus “lays down his life for the sheep” (John 10:11). It was his choice, freely embraced. Again, “For this reason the Father loves me, because I lay down my life that I may take it again. No one takes it from me, but I lay it down of my own accord. I have authority to lay it down, and I have authority to take it up again” (John 10:17-18).

(8) And we must never forget that it was his “Son” whom the Father gave. Not an angel. It wasn’t Michael or Gabriel that he sent. It wasn’t one of the four living creatures from the book of Revelation whom he gave. No one but his Son could achieve the redemption of fallen mankind. No one but his Son could adequately express the depths and intensity of how much the Father loved this fallen and rebellious world.

(9) What is this thing called “eternal life”? Is he saying that if we believe in Jesus we will live forever and ever? In other words, is this simply a way of describing the unending duration of our existence? Well, on the one hand, yes. He is saying that we will live forever. But everyone lives forever, not just Christians. Not everyone, however, lives in the presence of God on the new heaven and new earth. Many will exist forever separated from God, in hell.

So “eternal life” must mean something more than simply “always being alive” or “existing forever.” Surely there is a qualitative force to these words. In other words, he’s talking not so much about how long we live but about the kind or quality of life that we’ll experience forever. So what is it that makes this “eternal” life different from what unbelievers will experience?

This “life” that we receive through believing and trusting and treasuring the Son is the inestimable joy of dwelling in the presence of God himself forever, basking in the beauty of all that he is, finding endless satisfaction in the multifaceted and diverse revelation of the splendor of our great Triune God! What we get when we believe is God! Every other blessing that comes to us in the gospel is good because it makes possible our getting God. Eternal life, then, is an eternity of unbroken, unimaginably intimate, unfathomably satisfying fellowship with and enjoyment of God himself.

(10) And how might one come into everlasting possession of this glorious promise? It comes to the one who “believes.” It is faith and faith alone in Christ and Christ alone that lays hold of eternal life. In the immediately preceding verse Jesus himself declared that “whoever believes in him may have eternal life” (John 3:15), a belief or faith or confident trust that is mentioned no fewer than 98x elsewhere in the gospel of John alone.

Disowned for Jesus: What I Lost and Found in Christ